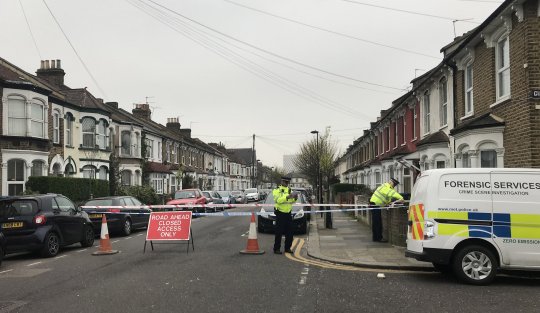 A fifth man is fighting for his life after a being stabbed while walking down a road in north London. Police said they have not yet formally linked the attack to a series of stabbings that took place over the weekend, but they said the ‘location and manner’ of the attack was of concern. The latest victim was stabbed shortly after 5am in Fairfield Road, Enfield, north London.

The victim, believed to be in his 30s, was walking with a friend when he was attacked and made his way to Aberdeen Road where he was found by police. His companion was not injured. Police said the suspect was tall, skinny, black and wearing a hoodie. Detective Superintendent Luke Marks said: ‘I am aware that events from the weekend have caused a huge amount of worry and concern among the community, and that this incident will cause further alarm. ‘While at this stage the incident has not yet been formally linked, the location and manner of this attack will be of concern to the public. ‘Our advice continues that the public remain vigilant, and to contact police regarding anyone acting suspiciously. ‘You will see additional uniformed patrols in the Edmonton area; if you have any concerns, please speak with my officers immediately.’