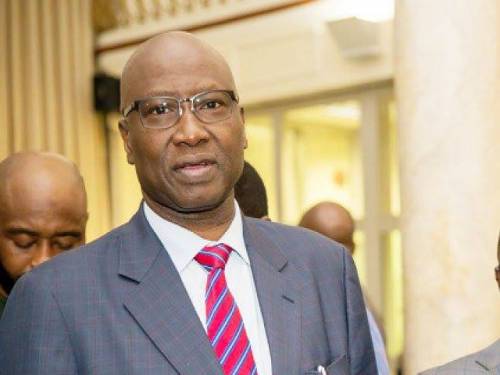 Boss Mustapha, Secretary to the Government of the Federation (SGF), may not have bargained for the kind of bitter fight he is enmeshed in, following his support for Jibrilla Bindow, Governor of Adamawa State, in the recently concluded elections.

The SGF, SaharaReporters gathered, is currently battling a intrigues weaved together to end his political career for daring to cross paths with pro-Buhari interest groups within the Adamawa political sphere in order to boost his prospects of becoming Bola Tinubu’s running mate for the 2023 presidential election.

If nothing, it is explicit for now that his alleged succession pact with Bindow, with a due date in 2023, is now a mirage, owing to a synergy that forced Bindow out in a landmark governorship election loss after just a single term.

Historically, in Adamawa State, every governor has secured a second term in office, Bindow being the only exception.

In this fight, SGF Mustapha is the man in the eye of the storm, for aiding Bindow to pocket the All Progressives Congress (APC) structure and subsequently snatch the governorship ticket to the dismay of many chieftains.

To these political Juggernauts, Bindow’s first term was characterised by gross incapacity, as such they couldn’t fathom why a man of Mustapha’s pedigree would want to be associated with him.

They also blamed APC’s poor outing in Adamawa in the last general elections to Bindow’s abysmal performance and nonchalant attitude to state issues and party matters.

But the pro-Buhari groups’ other grouse against Bindow dates back to President Muhammadu Buhari’s 104 days of medical vacation in the United Kingdom (UK).

It was gathered that Bindow was one of those who lobbied to deputise for Professor Yemi Osinbajo, allegedly hoping that Buhari would be ferried back home in a body-bag.

Former President Olusegun Obasanjo, as a prominent Yoruba leader who wielded considerable influence on Buhari’s government then, was conscripted to prevail on Osinbajo if the need arose.

Obasanjo, as gathered, agreed to the plan, seeing a sitting Vice President of Adamawa extraction would technically whittle down Atiku Abubakar’s hold on Adamawa politics and probably discourage him from running in 2019. But all that was not to be, Buhari came back hale and hearty.

Babachir, like President Buhari, had taunted those who wished his principal dead at different fora. “In fact, some of them wished him dead, but I can assure you that by the grace of God, Buhari will outlive them,” he once said.

Now that Bindow is out of the way and the succession contract nullified naturally, Boss Mustapha, cashing in on his value as the most prominent northern Christian politician of APC stock, is aspiring to clinch a running mate ticket in a Bola Ahmed Tinubu presidential project. This explains how and why Buhari’s henchmen have initiated the move to truncate the APC zoning formula.

In a move widely seen as testing the waters, Babachir recently came out to say “nothing in the law mandates the ceding of power” to Tinubu’s southwest. Other steps to follow involve drafting the next cabinet with Buba Marwa or any other person, but not Mustapha as the SGF, all to be sure Mustapha is cut to size ahead of time.

There is also the plan to reorganize the Adamawa APC structure. Accordingly, all those alleged to have been hand-picked by Bindow and Mustapha in the last congresses would be weeded out, preparatory to the next round of polls.

The proponents of this reorganisation have predicted bleak future for the APC under its current handlers in Adamawa State. To them, the party’s chances cannot be guaranteed in future outings, if its structures are left in the firm grip of Bindow and Mustapha.

With Aisha Buhari, wife of the President, recently adding her voice against the Bindow-Mustapha tango, it is only a matter time before the SGF would be off the stage.