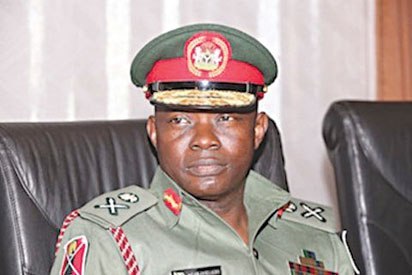 The Chief of Defence Staff, General Gabriel Olonisakin, has raised an alarm that the current security problems bedeviling Nigeria are threatening its continued corporate existence, asking the nation’s security services to synergize to arrest the situation.

Giving a keynote address at the closing ceremony of the Joint Campaign Planning Course,held at the Defence Intelligence College, Abuja, Olonisakin, who noted that arresting the security problems required collective efforts, however, regretted that there was a gap in synergies among the nation’s security agencies in operations undertaken by the Armed Forces of Nigeria.

Speaking at the event through the Director of Training, Defence Headquarters, Air Commodore Paul Ohemu, the Chief of Defence Staff said the identified gaps was the reason the course was organized.

“The challenges we face today threaten the corporate existence of our dear nation.

“Fighting these challenges is a collective effort and success hinges on sound planning and synergy.

“It is premised on this, that I am particularly delighted that the course, was organized and designed to address key gaps in joint operations undertaken by our Armed Forces,” he said.

The defence chief, while expressing happiness for the successful conclusion of the two-week long training course, noted: “that the objectives of the course which among others included equipping the participants with the skills required for the integration of concepts in the planning stages of the campaigns were attained.”

“It is not surprising to learn that the instructional periods provoked very fulfilling interaction among participants on the best approaches to joint campaign planning.

“I have no doubts that you have used this opportunity to establish friendships that would engender future interactions.

“It is therefore expected that as you return to your various services headquarters, units and establishment, you would bring to bear the knowledge you have gained on the course,” he said.

For the participants outside the country, he told them, “I believe you have gained tremendously through useful interactions during the course.

“You are expected to serve as a resource person on subject matters in your various organizations after undertaking this course.”

“We hope to build on the synergy that has been established with you during the course. I also hope what you have learned will serve as enablers to your organizations as you get back to work,” he added.

While congratulating the participants and wishing everyone safe journey back to their respective places of work and family, he “expressed sincere gratitude to the British Military Advisory and Training Team for organising the course and providing experts on the subject matter.”

“I also want to use this opportunity to thank the experts who came all the way from the United Kingdom for being painstaking to ensure that the required technical knowledge was passed to the participants on this very pertinent aspect of the military planning process,” he further added.