Computer Village Protests: I Have Power To Appoint Anyone As ‘Iyaloja’ – Tinubu-Ojo 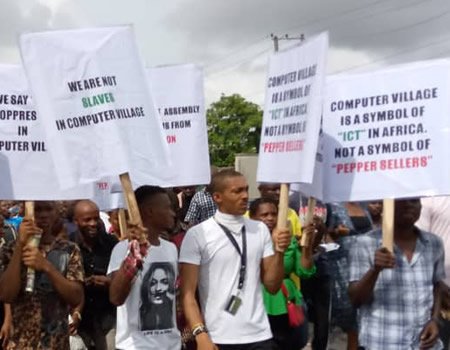 The President-General, Association of Commodity Market Women and Men of Nigeria, Mrs Folashade Tinubu-Ojo, has called on traders at the popular Computer Village to be law-abiding always and shun acts that could undermine peace in the market.

She made the call on Wednesday during a meeting with top members of Computer Village Community Development Association (CDA) and some traders in Ikeja.

The News Agency of Nigeria (NAN) reports that Tinubu-Ojo’s call was in reaction to Tuesday’s protests by some traders in the market over her endorsement of Mr Adeniyi Olasoji and Mrs Abisola Azeez as ”Babaloja” and ”Iyaloja” respectively.

NAN reports that some traders had staged protests round the market on Monday and Tuesday against what they called imposition of the new leaders on them.

The protesters, who paralysed activities at the market for hours on each of the days, carried placards with inscriptions condemning the endorsement.

They claimed it was an infringement of their rights for anyone outside of the market to choose leaders for them, as the Computer and Allied Products Dealers Association of Nigeria (CAPDAN) is independent.

Tinubu-Ojo said the protests were staged on a faulty premise, and she was disturbed by the action.

She alleged that the protests were sponsored by some disgruntled elements at the Computer Village who were not interested in the progress of the market.

Tinubu-Ojo said that the sponsors of the protests were opposed to the emergence of the new market leaders because they wanted to perpetuate themselves as leaders of the market.

She denied imposition of the new market leaders on the traders, saying she only endorsed those who had been chosen by stakeholders to lead the market.

”I have received several calls from Monday till date about what I have to say about the protests at the Computer Village and the allegation that I want to force market leaders on traders .

”And what I have told the people who called me is that ‘Why didn’t people protesting approach me and ask questions about what they are not clear about instead of taking the action?’

”But because they did not have the facts, that was why they did not come and the person who led the protests was the Chairman of traders who still wants to cling on to power even when his tenure has expired.

”And he went to organise some people, people who are not even in the Computer Village, to carry placard saying I want to impose leaders on them as if the leaders we want to instal are not part of the market.

”The constitution of our association even gives me the power to appoint leaders to take charge of any market, but because these people want to remain as leaders, that is why they are calling people to reject the new Baba Oloja and Iya Oloja”, she said.

She said it was wrong for anyone to say that as leader of all commodity traders she did not have right to supervise the affairs of Computer Villlage.

Tinubu -Ojo emphasised that Computer Village was under her control as the overrall leader of all markets.

She urged traders at the market to respect their host community and refrain from statements or actions that could cause discord.

Tinubu-Ojo said the claim by some traders at the markets that Lagos is no man’s land could trigger ethnic tension not only at the market, but in the state.

She said she was the mother to all traders in the state, irrespective of ethnic backgrounds.

Tinubu-Ojo said she had appointed non-indigenes to head markets like Tejuosho Phase 2 and Gorodo to prove that she was for all.

She advised traders at Computer Market not to allow themselves to used to breach the peace at the market, while calling on them to cooperate with the new leaders.

She also urged the new market leaders to work closely with traders to improve things at the market.

Speaking on behalf of Computer Village CDA, Alhaji Olushola Coker said landlords in the area were in support of the endorsement of the new market leaders.

He said it was normal for markets to have leaders, and wondered why some traders protested the emergence of the new Iyaloja and Babaloja.

”We are in support of these new leaders and we commend Chief Folashade Tinubu-Ojo for endorsing the new market leaders to see to the affairs of the market,” he said.

Also speaking, the reagent to the stool of Olu of Ikeja, Prince Isiaka Apena, said the protests over the new market leaders were uncalled for.

He said leaders were to see to the welfare of markets and urged those protesting to join the new leadership to move the market forward.

Apena reiterated the need for traders to show respect for their hosts, saying the claim that Ikeja belongs to no one was provocative an an insult to the Aworis who had lived there for over 400years.