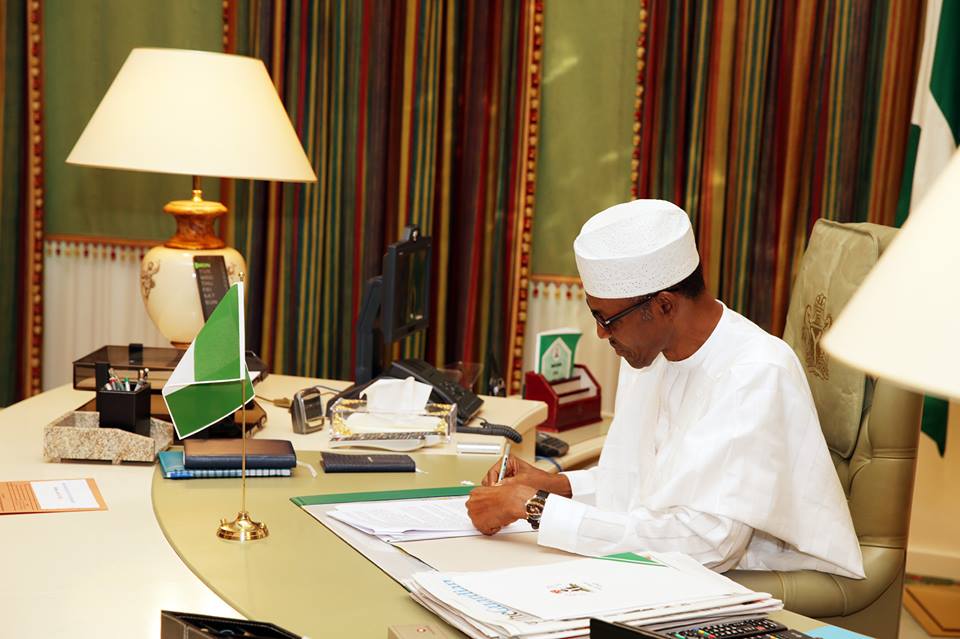 President Muhammadu Buhari on Monday in Abuja signed the 2019 Appropriation bill of N8.92 trillion into law.

The president had submitted the 2019 budget of N8.83trillion to the Senate but was increased by about N10billion by the Upper House, bringing the amount to N8.92trillion.

The News Agency of Nigeria (NAN) reports that the dignitaries who witnessed the signing of the budget, which took place at the mini-conference hall of the president, included the Senate President Bukola Saraki and the Speaker of the House of Representatives,Yakubu Dogara.

The Secretary to the Government of the Federation, Boss Mustapha and the Chief of Staff to the President, Malam Abba Kyari also witnessed the signing of the budget.

Others at the event were the Ministers of Finance (Zainab Ahmed), Budget and National Planning (Sen. Udoma Udu Udoma), Information and Culture (Lai Mohammed) and the Chairman of the Senate Committee on Appropriations, Sen. Danjuma Goje,

The Senior Special Assistant (SSA) to the President on National Assembly Matters (Senate), Sen. Ita Enang and his counterpart for the House of Representatives, Umar El-Yakub were also at the event.

Minister of Budget and National Planning, Udoma Udo Udoma, after the signing of the bill by the president said the 2018 Budget will help the present government consolidate the achievements of previous budgets and deliver on Nigeria’s Economic Recovery and Growth Plan (ERGP) 2017-2020.

He expressed his happiness with the implementation of the 2017 budget, which saw the N1.5 trillion implementation of capital projects during the 2017 fiscal year, and said the government will work hard to recreate the same achievement and generate the revenues required to finance projects and programmes that’ll significantly improve the economy.

NAN also reports that during the signing of the 2018 bill, the president further noted with dismay, the cuts made by the National Assembly to the bill he originally presented.

He said the legislature made cuts amounting to N347 billion in the allocations to 4,700 projects submitted to them for consideration and introduced 6,403 projects of their own amounting to N578 billion.

The president said he only signed the bill because he didn’t want to further slow down the pace of recovery of Nigeria’s economy, and further disclosed that he’ll send “a supplementary and/or amendment budget” to the national assembly to rectify the critical issues he raised.