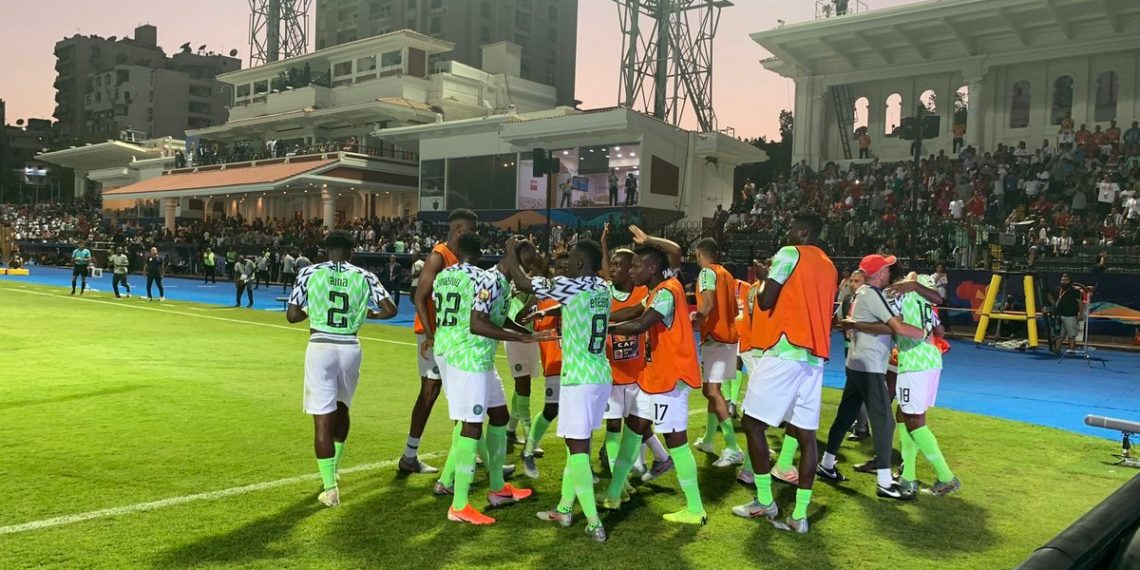 There will be a new winner at the Total Africa Cup of Nations, Egypt 2019 after defending champions Cameroon were sent packing by Nigeria who beat them 3-2 in a five-goal round of 16 thriller in Alexandria on Saturday evening.

Odion Ighalo struck twice with Alex Iwobi scoring the winner after Cameroon had raced from a goal down to lead 2-1 courtesy of goals from Stephen Bahoken and Clinton Njie.

What started as a slow hands back approach from both perennial rivals ended in dramatic fashion with the defending champions scoring two quick goals in the final five minutes of the game to complete their first half comeback.

Bahoken drew Cameroon level in the 40th minute when he tapped in simply from a yard out after Nigerian keeper Daniel kpayi failed to pick out a Christian Bassogog cross from the left.

Three minutes later, Cameroon were 2-1 up when Njie latched on to a long ball from skipper Eric Choupo-Moting before beating Kenneth Omeruo for power and finishing with a strong low effort from inside the box.

In a half that they were hugely underwhelming, Clarence Seedorf was a delighted man seeing his charges go to the dressing rooms a goal up.

In the second half, Nigeria tore a piece off Cameroon’s script, responding with two goals in three minutes to re-take the lead.

Ighalo completed his brace in the 62nd minute beating the offside trap and sweeping the ball past Onana after Musa had done well to chest down Collins Awaziem’s cross from the right.

Three minutes later, Iwobi scored what would turn out to be the winner when Cameroon were caught off possession, Ighalo sweeping the ball through to the Arsenal forward who finished calmly past Onana.

Nigeria coach Gernot Rohr had made changes at the start of the second half bringing in Samuel Chukwueze for Simon in a bid to increase the speed of the game.

Cameroon tried to turn the game back in their favor with Seedorf bringing in Karl Toko Ekambi for Njie. As the clock ticked, Rohr resorted to guard his win bringing off match winner Iwobi for defender Leon Balogun as the Super Eagles nervously held on for the win.