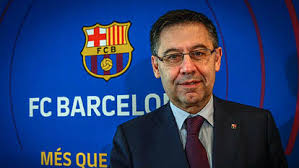 Barcelona president Josep Maria Bartomeu has resigned, with the entire board also stepping down from their posts.

Bartomeu’s decision comes after several months of criticism in the wake of Barcelona’s 8-2 Champions League elimination to Bayern Munich, as well as Lionel Messi’s shock request to leave the club shortly after.

Although the club was able to keep hold of Messi, with the longtime Barca star staying to avoid having to take the club to court, Bartomeu’s position has been under scrutiny for months.