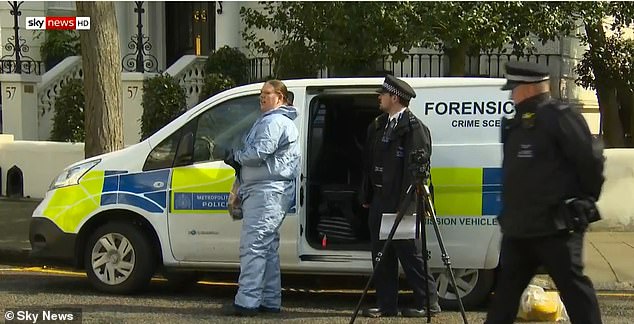 Armed Police opened fire on car that repeatedly rammed the Ukrainian ambassador’s vehicle outside of the embassy.

A silver Mercedes raced towards the Ukrainian ambassadors car as police shot at the driver through the window.

Police have sealed off a street near the Ukrainian embassy in west London today after reports of gunfire.

A statement from the Ukrainian Embassy said: ‘Around 10 am on Saturday 13 April, the official vehicle of the Ambassador of Ukraine to the United Kingdom was deliberately rammed as it sat parked in front of the Embassy of Ukraine’s building.

‘The police were called immediately, and the suspect’s vehicle was blocked up. Nevertheless, despite the police actions, the attacker hit the Ambassador’s car again.

‘In response, the police were forced to open fire on the perpetrator’s vehicle. The culprit was apprehended and taken to a police station.No one of the Embassy staff were injured. The police are investigating the suspect’s identity and motive for the attack.’

A woman who works at a nearby shop said she heard shots fired twice between 10am and 11am on Saturday.

The woman, who did not wish to be named, said officers arrived “very quick”, adding: “I saw many police cars coming.”

One witness in the area claimed on social media they had heard up to 10 shots in Holland Park this afternoon.

Photos from the scene show a number of police cars and officers in the area.

Henry Greenfields, who lives nearby, told MyLondon a neighbour had heard shots fired and then seen police return fire.

2019-04-13
Previous Post: BREAKING: At Least 10 Burnt Beyond Recognition In Gombe As Petrol Tanker Collides With Truck
Next Post: Illegal Flow Of Arms Into Nigeria Worries Buhari