BREAKING: A Shooting At A Synagogue Near San Diego Has Left 1 Dead And 3 Injured 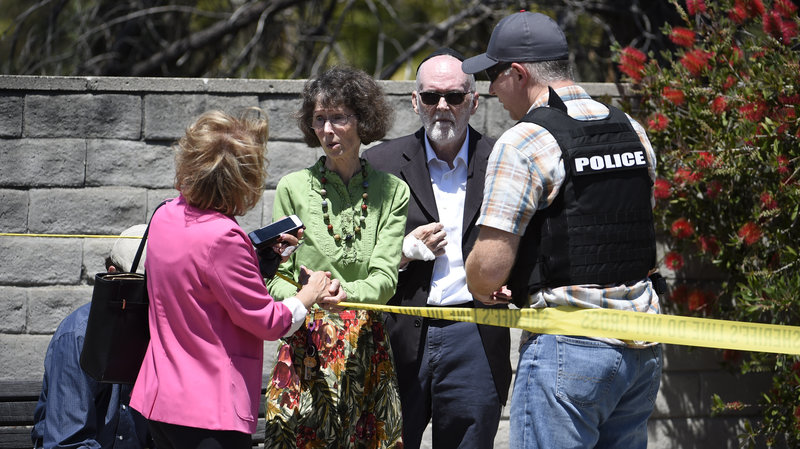 Police in San Diego County have detained one man for questioning following a shooting at a Poway, California synagogue Saturday morning that left one person dead and at least three injured.

Sgt. Aaron Meleen described the incident to which authorities were called as an “active shooter situation.”

“As you can imagine it was an extremely chaotic scene with people running everywhere when we got here,” he said.

Saturday is Shabbat, or the Jewish Sabbath, and the Chabad of Poway was scheduled to be holding services, according to its website. On Facebook, the synagogue had advertised a Passover Holiday Celebration scheduled to begin at 11 a.m. local time on Saturday.

The sheriff in Poway later tweeted that a man had been detained for questioning “in connection with a shooting incident.” Meleen said the suspect was detained down the road from the synagogue.ADVERTISEMENT

“We’re confident that there are no shooters that are outstanding,” he said.

Deputies did not say how many people were injured, but the wounded were taken to Palomar Medical Center. Bobbette Brown, a hospital spokesperson, told BuzzFeed News that four people had been transported to their emergency room.

Poway Mayor Steve Vaus said in a phone interview on MSNBC that one person had died, although no other official had yet to confirm that fatality.

The mayor described the incident as a hate crime. “All of the faith communities here are like family,” he said. “Just a week ago we had an interfaith gathering to find common ground. So for this to happen only a week later, at the end of the passover, only a week after Easter, is horrific.”

“No known threats, however in an abundance of caution, we will be providing extra patrol at places of worship,” he tweeted.

Federal agents with the FBI and the Bureau of Alcohol, Tobacco, Firearms and Explosives were also on the scene.

Minoo Anvari, a member of the Chabad, told local media her husband telephoned her to say there had been a shooting.

“One guy came and [started to] shoot everybody, cursing,” she said he told her.

In October, exactly six months ago to the day, 11 people were killed, and four police officers wounded, after a gunman opened fire in a synagogue in Pittsburgh, Pennsylvania, also on a Saturday morning. The suspect in that shooting, who had railed against Jews online, was subsequently charged with a total of 29 federal charges, including 11 counts of obstruction of exercise of religious beliefs resulting in death.