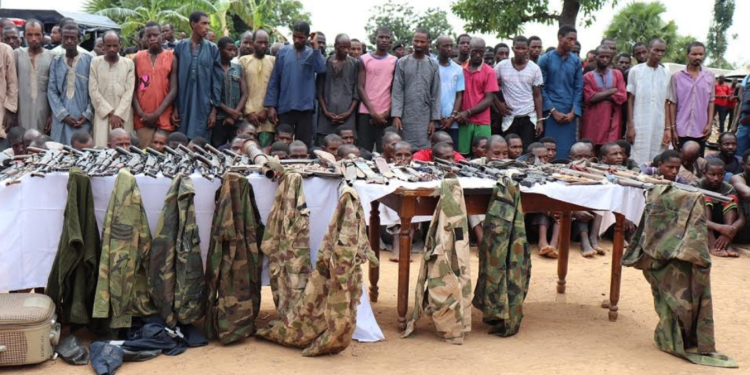 The Police on Thursday said they had arrested 93 suspected kidnappers in different parts of North Central, North East and North West Zones of the country.

Force spokesman and Deputy Commissioner of Police, Frank MBA, said in a statement in Abuja that the suspects were arrested by operatives attached to the Operation Puff Adder.

He said that the operations leading to the arrest of the suspects was carried out by joint team of police operatives attached to Operation Puff Adder, North-Central sector.

“Other operatives in the Joint Mission include personnel from the Police Mobile Force (PMF) the Counter Terrorism Unit (CTU), Special Protection Unit (SPU) and the Special Forces., ” he said.

He said that police investigators had commenced comprehensive investigation of all the suspects.

The spokesman said that the investigations among other things, were aimed at tracking, uncovering and disrupting the sources of arms supply to the criminal groups.

He said that it was also to identify their collaborators and bring all involved in these heinous crimes to justice.

Mba said that the achievements recorded by the police within the last few days were in line with the objectives and core mandates of Operation Puff Adder.

“The achievements are also indicative of the fact that the security agents are now winning the war against the criminal elements,”he said.

He said that the acting Inspector-General of Police (IGP), Mohammed Adamu, had reiterated the commitment of the police to restoring sanity on the country’s highways and cities.

The IGP, while commending operatives for their sacrifice and resilience, also expressed gratitude to the general public for providing credible intelligence that had helped the police in achieving the successes recorded so far. ​

2019-05-16
Previous Post: BREAKING: Plane Crashes Near Dubai Airport, Three Britons And A South African Killed
Next Post: The End Of Prime Minister May