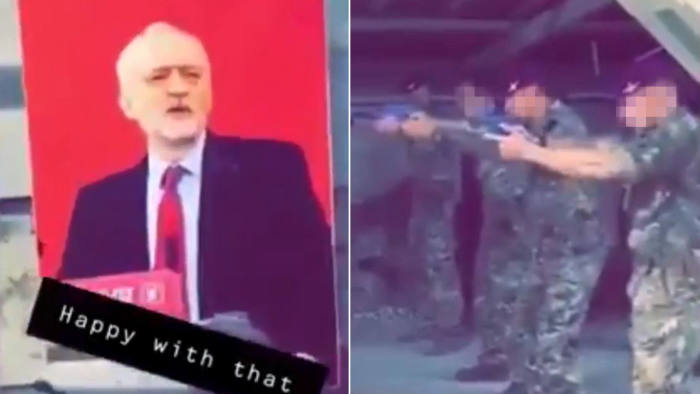 Jeremy Corbyn says he was “shocked” by footage apparently showing British paratroopers using his photograph as a target.

An image of the Labour was apparently used as target practice by four soldiers, thought to be based in Kabul, Afghanistan with the 3rd Battalion Parachute Regiment.

The opposition leader said: “I’m shocked, obviously, that this sort of thing has happened.

“I hope the Ministry of Defence will conduct an inquiry into it and find out what was going on and who did that.”

“Conduct those divisions and disagreements in a respectful way. Don’t descend into something ugly and violent.”

It is thought the video was first posted on Snapchat but has now been widely shared on other social media platforms.

Footage starts with uniformed officers turning their army-issue weapons to the far-end of the shooting range before unloading a number of rounds.

The camera pans around to the photograph of Corbyn, whose face has been pierced by several rounds of ammunition. A caption “happy with that” is emblazoned on the video.

Non-lethal hardened wax substance instead of live rounds of bullets were used to pierce the image.

TV News understands the photograph of Corbyn which the soldiers shoot using army-issue weapons was taken in March 2018, meaning the incident would likely have taken place within the last year.

The soldiers’ “Drop Zone flashings” on their left shoulders, which would identify which parachute regiment they are in, cannot be seen.

It is unclear from the footage whether the soldiers were under official instructions or whether it was part of an authorised exercise.

Brigadier Nick Perry said the video was “unacceptable” and that the soldiers showed as “serious error in judgement”.

He added: “It falls far below the behaviour that we expect of our soldiers in the brigade.”

Although he did not name the individuals, he said the soldiers had been working with NATO and Afghan allies.

Brigadier Perry added: “Let me be clear – the Army is, and always will be, an apolitical organisation.”

An Army spokesperson said: “We are aware of a video circulating on social media, this behaviour is totally unacceptable and falls well below the high standards the Army expects, a full investigation has been launched.”

A Labour Party spokesperson said: “This behaviour is alarming and unacceptable. We have confidence in the MoD to investigate and act on this incident.”