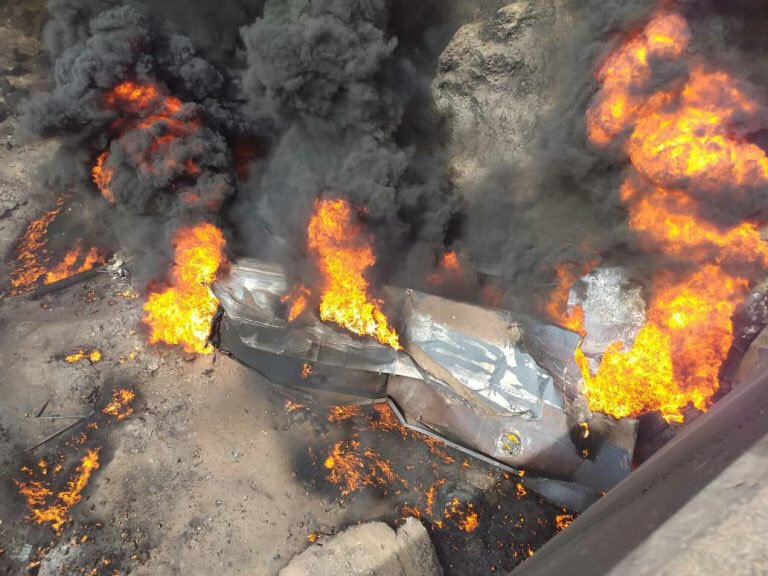 The Joint Military Task Force (JTF) in the Niger Delta has revealed that the masterminds of the April 21 fire outbreak at Aiteo’s OML 29 oilfields died in the inferno.

Rear Admiral Akinjidie Akinrinade, the JTF Commander, disclosed this shortly after inspecting the site of the incident in Awoba area, along the 97 kilometer Nembe-Bonny oil export pipeline in Rivers.

He expressed regret over the fire which led to outage of crude supply from the high pressure 150,000 barrels per day Nembe Creek Trunk Line.

The commander of the joint task force, Operation Delta Safe, however, noted that troops deployed to the area responded immediately the incident occurred.

He explained that troops on surveillance at a nearby houseboat which arrived in the scene confirmed that all the vandals who breached the pipeline died from the explosion and fire that followed.

On arrests, he said that although the vandals died in the act, efforts were underway to track their collaborators because the criminals involved in oil theft operated in groups.

Akinrinade said that the joint military force would redouble its efforts against oil theft and pipeline vandalism and assured oil firms in the Niger Delta of safety of its personnel and facilities.

“I am here for an on-the-spot assessment following the fire incident on the Nembe creek trunk line, which is a critical national asset and to restate our commitment to protecting oil facilities in the Niger Delta region.

“This incident has adverse economic implications and the military high command is concerned; that is why I am here with my component commanders and we shall continue to provide security to the oil firms.

“I assure the oil firm of security to ensure that the breached point on the line is traced and fixed,” the commander said.

The News Agency of Nigeria (NAN) reports that the remains of the suspected vandals and oil thieves were being recovered in the creeks when the commander visited the area.

Local divers were seen searching for more bodies along the creeks.

NAN recalls that Aiteo had shut oil injection from the line following the incident and absolved itself from liabilities of not meeting the contractual obligation of crude supply due to incident.

The trunk line had earlier been shut on March 1 and restarted on March 6, following an explosion from a well head in Nembe creek which also resulted in a fire outbreak.