A Man Has Been Killed In A "Machete Attack" In The Latest Tragedy Of The Capital's Knife Crime Epidemic. 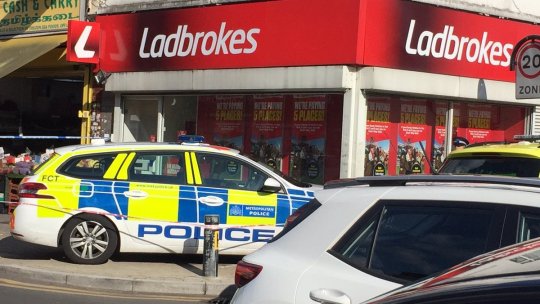 A MAN has been killed in a “machete attack” in the latest tragedy of the capital’s knife crime epidemic.

The victim, believed to be in his mid-40s, was pronounced dead at the scene on Northolt Road in Harrow, north west London this afternoon.

Paramedics from London’s Air Ambulance battled in vain to save the man’s life after being called to the scene at 3.14pm.

Another man was arrested on suspicion of murder soon after when cops were told he was seen running from the scene with a machete.

And witnesses reported seeing the victim being “hit several times with a machete” in an attack.

But Scotland Yard is currently treating the death as unexplained while investigators establish whether or not the victim’s fatal injuries were recent or pre-existing.

And it is unclear if the machete was related to the man’s death.

The incident comes just one day after and 15 miles away from where a fifth person was found to have been knifed in Edmonton, north London after four people were randomly stabbed in a rampage over the weekend.The bloodshed is just the latest violence in the capital, with two men knifed in Wembley outside student  halls last night.

A Metropolitan Police spokesperson said of today’s incident: “Police were called by the London Ambulance Service at 15:20hrs on Wednesday, 3 April to reports of an injured man on Northolt Road in Harrow.

“We await the findings of a post-mortem examination to confirm whether this was a recent or pre-existing injury.