2023 ELECTION: PDP Group Demands Zoning Of Governorship In Delta, Rivers, And Presidency To The South 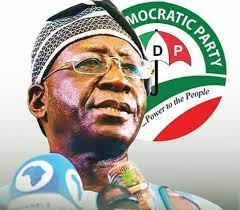 National Leader of a group of young PDP stakeholders under the auspices of the Concerned PDP League, comrade Daboikiabo Z. Warmate has called on Governor Ifeanyi Arthur Okowa and his Rivers state counterpart Governor Nyesom Ezenwo Wike to pick their successors from Delta South senatorial district of Delta State and the Riverine area, in Rivers state.

The former personal assistant and former student leader and leader of the Concerned PDP League said Delta State is made up of five distinctive ethnic groups, namely: Urhobo, delta Igbo, Ijaw, Isoko, and Itserkiri which he referred to as the “five fingers of Delta State” and the three senatorial districts – Central, North, and South, as the “triangle.”

He referred to the Riverine and Upland political dichotomy as “Rivers Two Legs” just like the Mao Zedong (Mao Tse-tung) Walking on Two Legs policy in china and also the three senatorial district; East, South East, West as ” The Triangle.”

Warmate said, neither our great party, the PDP nor those aspirants from the north who were beneficiaries of zoning in 2019, that are agitating for the ticket to be thrown open for all to contest in 2023 has given cogent reasons why the Presidency should not be zone to the south.

He stated this while speaking in an exclusive Interview with TOS Television reporter, Rose Audu, monitored from London on Saturday.

Warmate asserted that his opinion on power rotation is guided by PDP’s position, Delta State, Rivers State’s and Nigeria’s multi-ethnic configuration. That in Delta State, the governorship position should continue to rotate within the three senatorial districts. And as for Rivers State, the imperative of zoning or rotate between the Riverine and the Upland cannot be over-emphaised. In the case of Nigeria, and power rotation between the North and South must be a critical feature of our Nation emerging democratic protocol. This would provide political equanimity which is in consonance with the PDP constitution of equity, justice, and good conscience.

Comrade Warmate noted that from the inception of our democratic dispensation, the temperament of the people and political leaders of Delta State, Rivers, and Nigeria were aligned with the principle of rotation and zoning.

Delta Central has produced two governors (Felix Ibru and James Ibori), Delta North has the incumbent (Dr. Ifeanyi Arthur Okowa) and Delta South has Produce 1 (Emmanuel Eduahghan) since everyone has had a pinch of the pie and the Central has gotten it twice, it will only be fair, justice and equitable for Delta South Senatorial District to produce the governor in 2023, he said. He commended Okowa whose body language seems to rightly tilt towards the Ijaws in the Delta South Senatorial District.

In the case of Rivers State, it’s between the Riverine and Upland. The current Governor, His Excellency, Barr., N. E. Wike is from the upland, and the past three governors, Peter Otunaya Odili, Celestine Omehia, and Rotimi Chibuike Amaechi, are all from the same upland. Comrade Warmate commended Governor Wike for looking towards the Riverine and urged him to look within the political class.

When asked about zoning and Atiku’s’s request to be given the right of first refusal? Warmate stated that the problem is that “people don’t want to tell the truth and hear the truth and I feel so sad.” there is a political tradition of northern region and southern region rotational presidency in the PDP and that’s even beyond political parties.

It’s clearly stated in the PDP constitution as amended in 2017, in Section 7, subsection 3, and c; 3. The Party shall pursue these aims and objectives by – (C). adhering to the policy of the rotation and zoning of Party and Public elective offices in pursuance of the principle of equity, justice, and fairness. And section 46, subsection 3, states that; The Executive Committee at all levels shall, in the appointment or election of members of the Executive Committees at respective levels of the Party, observe and apply the principle of Federal Character. So zoning is a policy tool needed to pursue the implementation and achievement of the aims and objectives of our great party and as such cannot be Jettison.

If you recall, former President, His Excellency, Dr. Goodluck Ebele Azikiwe Jonathan GCFR, GCON got 22,495,187 votes in 2011 but was not given the Right of First Refusal, not despite the fact that he was an incumbent president.

This same Alhaji Atiku Abubakar and his co-travelers insisted that it was the turn of the north and since they could not achieve that, they left the party and that notwithstanding GEJ as he was popularly called still scored 12,853,162 votes in 2015 and now juxterposed it with the former vice president, His Excellency, Alhaji Atiku Abubakar GCON, votes 11,262,978 in 2019. Judge yourself, who deserves the Right of First Refusal for the 2023 presidential election in PDP? Warmate questioned.

Comrade Warmate said that the National Chairman should prepare his resignation letter, peradventure that the ticket is thrown open and a Northern aspirant emerges, the Chairman can handover the letter within 72 hours to the Deputy Chairman South as provided by the PDP constitution as amended, 2017.

Comrade Warmate however, urge all party patriots to work together for the victory of the party and emphasize that, telling PDP members and leaders the truth does not mean he or the Concerned PDP League respect them any less and that they are not working nor supporting any presidential aspirant but rather stand with the PDP and it’s constitution and promote PDP’s ideology and values.