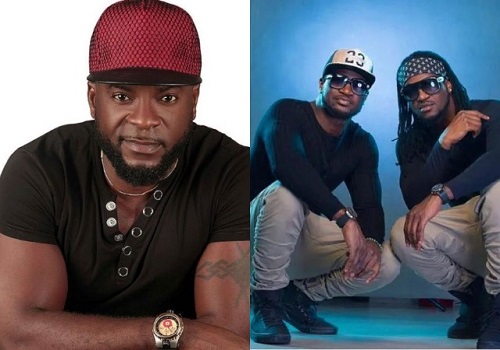 On Wednesday night, a video of the Okoye brothers’ reconciliation went viral.

After five years they came together amidst cheers and applause from friends, close associates and family members in Mr P’s Lagos residence.

The twin brothers, in the video, hugged lovingly and shook hands.

Reacting to their reconciliation, the movie star via an Instagram post, said the music stars reconciled’ because were no longer doing well musically.

He claimed they were on the verge of becoming extinct as separate entities which necessitated their reunion.

Ehumandu also mocked them for failing to use their initiative in the five years their beef lasted.

He wrote: “Rude Boy Paul PSquare and his brother Peter noticed they were going out of the music market as solo artists…and decided to come back together as they are tired of loosing out..Una dey congratulate them….Una for continue na…Hehe.”

He continued: “My people will say…Dem no dey tell man to comot for sun ..say e too hot..E good make we dey use our upper. Una dou @iamkingrudy! peterpsuare.”