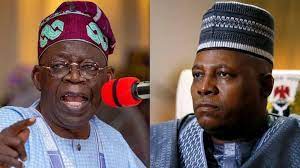 Firstly, I would like to congratulate Senator Ademola Adeleke for fighting a great campaign that finally culminated in a stunning Peoples Democratic Party (PDP) victory.

And as we all know, Bola Ahmed Tinubu, Presidential Candidate of the All Progressive Congress (APC), is not a man known for dithering, procrastinating, frightened, or timid over taking decisions on critical and weighty matters of national and local significance.

The bold decision by Bola Ahmed Tinubu to choose Senator Kashim Shettima, former Governor of Borno State, as his Vice-Presidential candidate for the looming 2023 general election, should be applauded as a great strategic electoral calculus and of competence over mediocrity, with an overwhelming zeal to turn Nigeria around from the brink of a precipice and for rising above religion and ethnic sentiments, that have bedeviled our nation for far too long. In fact, the decision is one whose time has finally come (see video below).

The antecedents of Bola Ahmed Tinubu and Kashim Shettima are well known. These two patriots do not have any trace of religion or ethnic bigotry in their DNA. Bola Ahmed Tinubu, for example, is among the few Nigerians who have been grooming leaders across the six geo-political zones of our nation. As Governor of Lagos State, Bola Ahmed Tinubu appointed Ibos and other nonindigenes of Christian faith in his administration.

A source close to the Atiku-Okowa election organisation, said under anonymity that the “Tinubu-Shettima ticket is the nightmare ticket that the Atiku-PDP have long feared”.

But Atiku-PDP’s initial strategy to deal with the Tinubu-Shettima feared reality was to define it as a Muslim-Muslim ticket and whipped up religion and ethnic hysteria. Meanwhile, the APC restrained themselves even when Atiku Abubakar, the ethnic divider in-chief, ensured that his party, the PDP, flagrantly ignored the provision of the PDP constitution on zoning and denied the South-East in particular and the South-South in general, of the opportunity to present a Presidential candidate.

Further, Atiku Abubakar (the ethnic divider in-chief), hijacked the PDP structure, by ensuring that almost all the top echelons of the party including Atiku Abukabar, the Presidential Candidate, and Iyorcha Ayu, the National Chairman, are all of the Northern extraction – very worrying.

Meanwhile, Babarchir Lawal’s misguided and ill-tempered letter on the Tinubu-Shettima ticket was rooted in his dashed personal political ambition, to be the vice-presidential nominee, and instead, coated his disappointment in religion and political hysteria on one hand and ethnic brouhaha on the other. Babarchir Lawal and his acolytes should focus less on personal interests and ambition, and more on APC electoral success. Babarchir Lawal and his cronies should work harmoniously with others, to achieve APC victory in the North Eastern and the North Western States respectively. But deliberately rocking the boat so as to orchestrate Atiku-PDP’s victory, would be personal vendetta taken too far.

And as for some APC members who tend to underestimate Atiku’s-PDP capacity to fight a brutal election campaign in the trenches should better think twice. In the Osun State governorship election campaign, for example, it was apparent that the elephant in the room that was stirring on our faces, were national issues such as Banditry and Kidnapping, Hunger in the Land, Galloping Inflation, and a breath-taking level of Unemployment – Osun state was indeed a fertile and dream battleground for any opposition political contest. And of course, there was only one outcome, Adeleke’s victory for Atiku’s-PDP.

However, all is not lost. APC should go back to basics. Tinubu-Shettima campaign council should incorporate and maintain the Buhari Support Groups in Nigeria and in the diaspora, particularly the groups that were in the trenches against the ethnic divider in-chief, Atiku Abubakar in the last Presidential election, without delay.

Under the current so-called Muslim-Christian balance ticket (or vice versa), with a former Major General as President and a Law Professor as Vice President, our nation is effectively on standstill with widespread banditry and kidnapping as a lucrative occupation, worsening poverty, and prevalent hunger, collapsing health care, lecturers on strike, mind-blowing youth, and chronic unemployment, severe epileptic power supply, etc.

Boko Haram’s audacious attack on Kuje Correctional center located about 30 minutes drive away from Nnamdi Azikiwe International Airport, Abuja, our nation’s seat of power, is indicative of the paralysis that has engulfed the so-called balanced ticket. Reports suggested that the Boko Haram operation lasted more than two hours without any response or resistance by the security agencies. And in common with the usual practice, heads did not roll, and the shameless Ministers and bureaucrats went about their business as usual. And the so-called balanced ticket remained aloof.

In the light, of the above quagmire, although the headwind is against Tinubu-Shettima’s candidacy, it is incumbent therefore on the so-called balanced ticket to address the above encumbrances headlong.

In conclusion, Nigerians at home and those in the diaspora are supporting Tinubu-Shettima’s candidacy to move our nation forward by taking the hard decisions that would put an end to insecurity, transform the economy, provide an excellent and affordable health care system, increase electricity generation from multiple sources, provide clear funding arrangements for the educational sector and rigorous enforcement of the rule of law.