Tinubu: I Can’t Celebrate When People Are Mourning Victims Of Train Attack 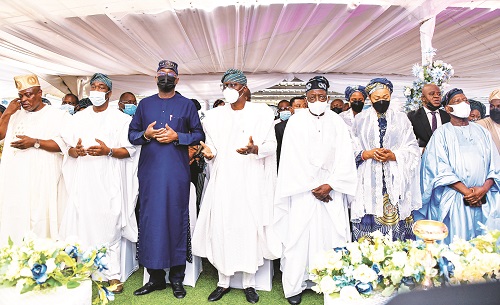 The stage was set. Gaily dressed and resplendent-looking guests who came from far and near sat in excitement, throwing banters.

The event got underway with introduction of some of the dignitaries. Many others were finding their way into the expansive Eko Hotel Convention Centre, Victoria Island, Lagos, venue of the ceremony.

Then, there was an announcement that Asiwaju Bola Ahmed Tinubu, the birthday boy, hosting everyone, had a message.

What followed was pin-drop silence. And then came the bombshell.

Tinubu announced that the colloquium to mark his 70th birthday would no longer hold because of the terrorist attack on an Abuja-Kaduna train in which eight people died, 29 injured and many abducted.

The former Lagos State governor said:  “Today is supposed to be a very joyful 70th birthday of my living on earth. I give thanks to God Almighty for being able to survive to this age.

“I have just been informed of a very sad incident in our country, very sad indeed that over 60 people and many more were killed and bombed on a train between Kaduna and Abuja just last night.

“For me to be here celebrating, dancing and enjoying myself doesn’t show enough concern of a statesman and a senior citizen of this country.

“I urge the clergies here to continue to pray and everyone of you to go home and pray.

“This event should not be holding. I’ve discussed with eminent personalities on ground and they have agreed with me. I’ve been a highly committed democrat; I have given myself to their suggestion that this event should be cancelled.

“We pray for the souls who have departed prematurely that they find rest. We also pray to almighty God to help us win the war over evil, set Nigeria on the right path, bless us and provide His guidance on all of us in our various ways.

“I want us to observe a one minute silence on this national tragedy. May God almighty bring peace and stability to our country, accept the souls of the departed and give succour and healing to the injured.”

Before the cancellation of the programme, the 13th edition with the theme: ‘Pivoting Nigeria into the new world order: Imperatives of good governance, guest lecturer, Prof. Olufemi Bamiro, former Vice Chancellor of University of Ibadan, and panel discussants were seated.

Tinubu arrived at 2.42pm amid cheers by guests who rose up to welcome him.

Rev. Adegbite, who brought felicitations from the CAN president and Southwest chairman, prayed for robust health and long life for the APC stalwart.

Eulogising Tinubu, the priest recalled his giants strides as governor for eight years, adding that he is a kind and generous giver, who the nation can depend on for leadership.

However, few minutes after, Tinubu, accompanied by Ganduje, Sanwo-Olu and former Ogun State Governor Segun Osoba, went to the podium to announce the cancellation of the programme.

Many dignitaries hailed Tinubu for his sensitivity and passion for the welfare of other Nigerians, noting that he is a good and compassionate leaders.

Deputy Governor Hamzat said Tinubu had demonstrated the traits of a humanist and leaders who shares the feelings of others.

He said: “This one is supposed to be the 13th edition of his birthday colloquium, but he said we should look at what has happened yesterday where some people bombed a train which has resulted in the deaths of our people. The Vice President (Prof Yemi Osinbajo) had already landed in Lagos, but he had to go back.

“Asiwaju decided that we should not have the celebration anymore so as to let Nigerians know that what has happened is an unfortunate incident and may God not let us experience such anymore. God should help take the devil out of the country because, of what use is killing ourselves. They killed people going to their various work places; they have turned children to orphans.

“What happened was a tragic event and Asiwaju said there is no need for us to celebrate this elaborately. It is good that we cancel it and we pray for the soul of the departed which I think everybody in the audience agreed as you can see that people clapped and they appreciated that thinking that we commiserate with Nigerians. Imagine innocent people going for their livelihood just met with this type of death, may the soul of the departed rest in peace.”

In another statement, the one-time governor urged those celebrating his birthday elsewhere  to stop, asking them to team up with him in donating to victims of the attack.

Hamzat added: “Asiwaju Tinubu’s action is a sign of unity amongst Nigerians from the top to down. All Nigerians, we have the same land; different languages don’t matter. The fact that somebody is an Hausa man or a Yoruba man is not by his own making, it’s the making of almighty God.

“My condolences to the families that are affected in this tragedy and I pray that Almighty Allah will have compassion on their souls and of course comfort the families and the immediate members of the departed.”

Hakeem Bamgbola, member of the  Lagos State Local Government Service Commission said: “It takes a man like Asiwaju Tinubu who has human feelings to  cancel such a very big event, to sympathise with those who lost their lives in the bombing of the train.

The l eader of Nupe Community in Ifako-Ijaiye and Ojokoro, Muhammad Abubakar, said Tinubu has shown leadership and demonstrated emphaty.

Former Lagos State Commissioner for Transport Dr. Kayode Opeifa described him as a caring and sympathetic leader, who is genuinely concerned about the poor and needy.

She said:”It is very sad that some people that left their houses for their normal activities only to meet their death. It is unacceptable.