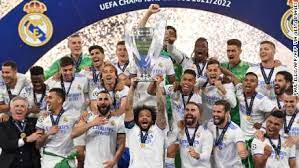 There were 13 previous triumphs in what we used to call the European Cup when at times Real Madrid swept to glory to seize the crown of Europe, but this, their 14th, showcased the finessing of the great Champions League trophy-winning machine – deadly when it matters most.

They struck just before the hour, with a goal from the quicksilver Vinicius Junior, appearing from nowhere on the Paris night as if whipped out of a sleeve to decide the most mediocre of finals. The possession of the ball, and the puppyish enthusiasm to play – that belonged entirely to Jürgen Klopp’s players. It is that which has propelled them to two trophies already this season, as well as to within a single point of the league title and this final too. Against the Madrid machine it was held at bay and then slowly, inexorably extinguished.

The killer instinct – this generation of Madrid players simply have it. As they fell back into shape time and time again, to shut down the usual passing routes and attack channels of Liverpool – the likes of Toni Kroos, Luka Modric and Casemiro were feeling their way through a familiar set of tunes. This is how they play now in the dusk of their careers and one cannot argue that it is anything but effective. They are the last survivors of a group of players who have remarkably now won five out of the last nine Champions League titles.

History will look back in some wonder at how they adapted and refined their more effusive game of the midpoint of the previous decade into this precise pinpointing of the game’s key moments. That allied to the capacity to endure through its most difficult moments is what makes them so formidable. Carlo Ancelotti won his record fourth Champions League as a coach with his goalkeeper Thibaut Courtois his outstanding player.

At the end, the man who was still Everton manager this time last year sat down casually on the lip of the presentation stage having received his medal and waited for his players to get theirs.

Madrid started their campaign on Sept 28 with a home defeat to the Romanian side Sheriff Tiraspol, one of the great Cup shocks of the modern era. In each of the knockout rounds they lost one of the legs they played, to Paris Saint-Germain, to Chelsea and then in the semi-final to Manchester City. They have, however, hung in there to keep on winning by the most slender of margins and this victory was testament to that resilience.

For Klopp and his players, in a game delayed by the chaotic scenes outside that saw hundreds of ticketed Liverpool fans locked out, this was the final that barely happened. The 64th game of their season needed one of the performances of the year to defeat these battle-hardened Champions League winners, and what Liverpool had was just not enough. They created some chances but the great forward line never fired. Thiago Alcantara and Fabinho both returned from injury and perhaps it was too soon.

There had seemed to be some doubt as to whether Thiago would play in the first place. Before the original kick-off at 9pm local time he had been passing the ball back and forth with a member of staff away from the starting XI group. When that finished he put an arm around Naby Keita who had been named on the bench but hitherto had been preparing with the rest of the starters. The pair had a chat and there were 11 outfield players in the final Liverpool warm-up. It was Thiago who remained in the starting line-up.

Against the conventional deep-lying defence, Liverpool tend to find a way but this one was organised very differently. Klopp’s players dominated the early part of the game, and they had the ball in advanced positions, although the threat from Karim Benzema and Vinicius was always there. That was to come for Liverpool – an inevitability at some point. The question was whether they could break through before then.

The best efforts they managed were stopped by Courtois. He slapped away a scuffed shot from Salah from arguably the best move of the half from Liverpool when Thiago had opened up the pitch with a big, precise hit out to the far right to Jordan Henderson and then Trent Alexander-Arnold had crossed. On 21 minutes the Belgian thrust out a giant right hand and pushed Sadio Mané’s shot onto the post.

The opportunities for Madrid were always going to come. In the first 15 minutes, Ibrahim Konaté steered the ball confidently away from Vinicius when the moment was in the balance and there was no-one behind the Liverpool defender to cover. Later Henderson would intervene when the young Brazilian darted in from the left side.

With two minutes left of the regulation time in the first half, Konaté and Alisson hesitated over the ball when Benzema lost it coming in from the left. Federico Valverde dashed in and from the collision with defenders and it came out to Benzema to score. The Var check to confirm the offside took more than a minute.

The big question was not whether Fabinho, back in the team for the first time since that Villa Park injury, had got the touch but whether it had first been played by Valverde. The decision under the laws of the game is thus: the moment a Madrid player touches the ball, Benzema’s offside position will have become activated. The touch off Fabinho, if there was one, is considered a non-deliberate act.

This was the hardest route through for Liverpool and Klopp would later make changes to try to break down the granite heart of the Real Madrid side. Diogo Jota would replace Luis Diaz who just found himself outnumbered. Then Naby Keita for Henderson and eventually Roberto Firmino for Thiago but before then they were a goal behind and fatally chasing the game.

It had come from down the left originally where Valverde was permitted to run with it for longer than expected and hit a low drive that was a cross in essence through and behind the Liverpool defence before they could react. Alexander-Arnold could not reach it but beyond his left shoulder was Vinicius who was in the right position to score from close in.

A severe blow to Liverpool and now the gate would close, with that midfield of Casemiro, Kroos and Modric deep in front of the defence. Behind them Eder Militao and the returning David Alaba looked solid. Courtois was on his game. He saved again from Salah’s curling left foot shot from the right five minutes after the Vinicius goal. The clock ticked down and the night slipped away from Liverpool.