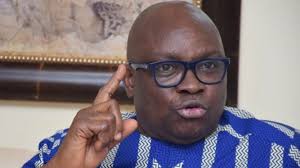 Ayodele Fayose, a former Governor of Ekiti State, has labelled members of the House of Representatives as a ‘mere toothless bulldogs’ that only exist on paper in the eyes of President Muhammadu Buhari.

Fayose made the claim while reacting to a resolution by the House of Representatives to invite the President to brief the House on the true state of security in Nigeria.

According to him, he would be surprised if Buhari honours their invitation.

Denton News recalls that the decision to summon President Buhari was taken at Tuesday’s plenary.

The House considered a motion moved by members from Borno State on the recent killings of 43 rice farmers by Boko Haram insurgents.

The debate became rowdy after the Speaker, Femi Gbajabiamila, said it would be inappropriate to invite Buhari to disclose the actions being taken towards handling the security situation in the country.

Gbajabiamila described it as counter-productive.

Reacting to the development, Fayose, in a tweet via his Twitter handle on Tuesday, said: “I will be surprised if the President honours the House of Reps invitation.

“The National Assembly that is supposed to be representing the people should know by now that in the eyes of this President, they only exist on paper because they are mere toothless bulldogs.

“Some of those Rep members at the forefront of the invitation of the President to appear before the House should expect EFCC invitation, freezing of their accounts or arrest for plotting to bring down the legitimate government of the President. I warned,” Fayose tweeted. 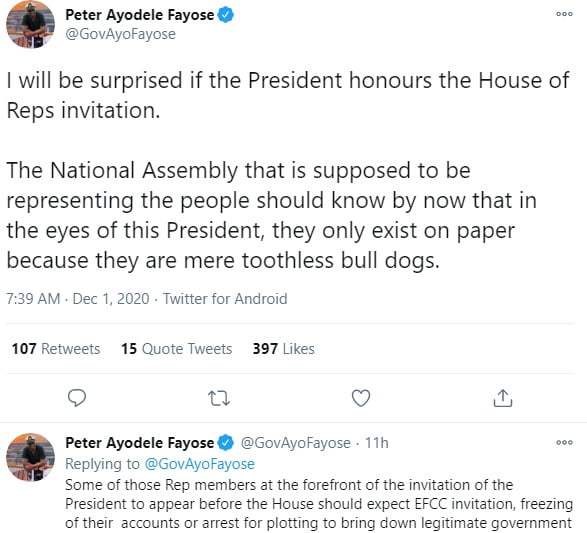