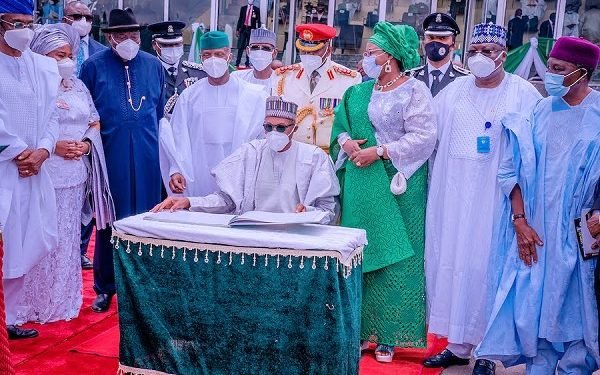 Jonathan was accompanied by his wife Patience. Buhari’s wife, Aisha, was also at the event held at the Eagle Square.

Buhari arrived at the venue at about 10 am and was ushered to the soapbox to review a mounted parade. He was thereafter escorted to inspect the guards in a parade in an open van.

The parade comprises members of the Armed Forces – the Army, Air Force, and Navy – as well as para-military forces.

The event was spiced with traditional dances and other performances by a combined military and civilian artistes.

The high point of the ceremony was the Nigerian Air Force display, which was scaled down because of inclement weather.

There was flypast by two Agusta helicopters, both actively involved in combat operations. One of them bore the banner of the theme of the celebration – ‘60 Together’.

The helicopters were followed in echelon by three Alpha jets used for air-to-air and air-to-ground combat operations such as during ECOMOG, Northern Mali and Niger Delta militant operations.

The jets were followed by Air 39ZA, also involved in operations in the Northeast and Northwest.

The event was closed with the signing of the anniversary register by the President, who was accompanied by his wife, Osinbajo, Jonathan, Gowon; Lawan; Gbajabiamila, the CJN, among others.