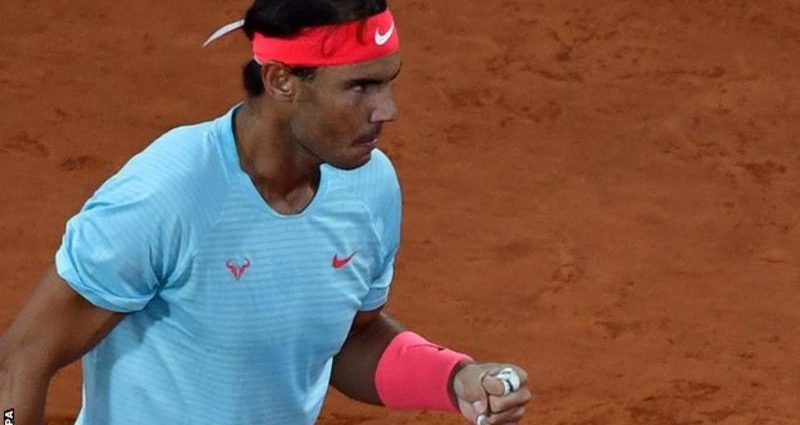 Questions had been asked about 34-year-old Nadal’s level, but he responded with an almost flawless performance.

The Serb was overwhelmed by Nadal’s rapid start and produced a despondent display as a result.

Defeat also meant Djokovic, who was bidding for an 18th Grand Slam title, lost ground on Nadal and Federer in their ongoing battle to finish with the most major wins.

Nadal sealed victory after two hours 41 minutes with a kicking ace out wide on his first match point, leaving the Spaniard laughing as he fell to his knees on the court where he has enjoyed unparalleled success.

“A win here means everything for me,” said Nadal, who also became the first player to win 100 singles matches at Roland Garros.

“Honestly, I don’t think about the 20th and equalling Roger, for me it is just a Roland Garros victory.

“I have spent most of the most important moments in my career here.

“Just to play here is a true inspiration and the love story I have with this city and this court is unforgettable.”

Nadal shows exactly why he is the ‘King of Clay’

Few things in the sporting world over the past 15 years have been almost as certain as Nadal winning the French Open men’s singles title.

This year, like with so many things across the world because of the coronavirus pandemic, there was more uncertainty.

Nadal himself put some doubt on his chances going into a tournament which looked and felt like no other French Open.

Played in cooler weather than usual – with the tournament in October rather than June – and without his usual preparation on the clay courts, Nadal said it represented the toughest test he had ever faced at Roland Garros.

But he came through these new challenges to win in arguably the finest fashion yet.

Not only did Nadal win the tournament without dropping a set for a fourth time, it was the manner of his one-sided victory against Djokovic that was so impressive.

Nadal raised his game to a scarcely believable level from the start, defending ferociously and attacking with equally great effect.

Everything he hit at Djokovic landed with pace and precision, leading to just six unforced errors in the opening two sets.

Djokovic looked up to the sky in amazement when Nadal eventually started making a few more mistakes in a more competitive third set – but by then it was too late for even him to turn the match around.

“Today you showed why you are King of the Clay, I experienced it with my own skin,” Djokovic said.

Djokovic had won 37 of his 38 previous matches this year, with his only defeat coming as a result of being defaulted in the infamous US Open fourth-round match against Pablo Carreno Busta last month.

Unlike Nadal, Djokovic had dropped sets in his previous six matches – albeit only three – but looked to be operating at a higher level as he swatted aside tougher opponents than Nadal.

Therefore, many would have considered Djokovic as the slight favourite going into the final.

Djokovic had played with clarity of thought and perfect execution through much of the tournament but looked befuddled and subdued as he was unable to cope with Nadal’s ferocious start.

Better serving and more aggressive returning by the Serb, who was playing fewer of the drop-shots that Nadal had read with speed of mind and fleet of foot, made the third set more like the contest the world had expected.

Frailties were still loitering, however, and appeared again when he produced a double fault to hand over the crucial break in the 11th game which enabled Nadal to serve out victory.

“I am not so pleased with the way I played but I was definitely outplayed by a better player on the court,” Djokovic said.