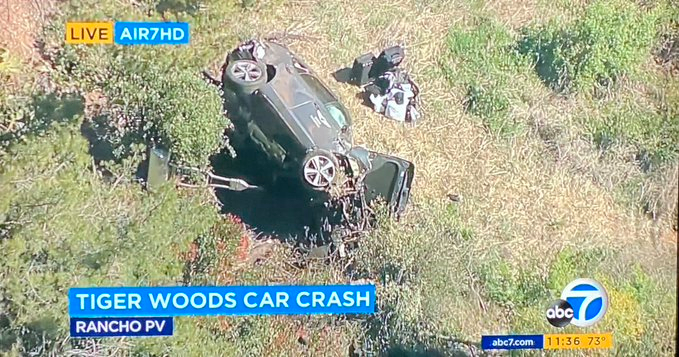 Tiger Woods has been rushed into surgery after a car accident which left the golf legend with multiple leg injuries, officials have confirmed.

Fire crews had to use the ‘jaws of life’ to get Woods from the vehicle after it rolled over and suffered serious damage.

The 45-year-old was then taken to a local hospital by ambulance where he is currently in surgery for multiple leg injuries, his agent Mark Steinberg confirmed.

He said: “Tiger Woods was in a single-car accident this morning in California where he suffered multiple leg injuries. He is currently in surgery and we thank you for your privacy and support.”

A statement from the Los Angeles County Sheriff’s Department read: “On February 23, 2021 at approximately 7.12am LASD responded to a single vehicle roll-over traffic collision on the border of Rolling Hills Estates and Rancho Palos Verdes.

“The vehicle was travelling northbound on Hawthorne Boulevard at Blackhorse Road, when it crashed. The vehicle sustained major damage.

“The driver and sole occupant was identified as PGA golfer Eldrick “Tiger” Woods.

“Mr Woods was extricated from the wreck with the “jaws of life” by Los Angeles County firefighters and paramedics, then transported to a local hospital by ambulance for his injuries.

“The traffic investigation is being conducted by investigators from LASD Lomita Station.”

Woods, a 15-time major winner, is one of the greatest golfers of all-time and one of the most iconic figures in sporting history.

Woods dominated the world of golf for more than a decade between the late nineties and early 2010s, before public scandal and physical problems saw him struggle for numerous years.

He is the youngest player ever to complete the career Grand Slam of majors and famously did the ‘Tiger Slam’ across 2000 and 2001, winning all four majors in a row.

His most recent triumph at the 2019 Masters came after years of crippling back injuries and spinal fusion surgery, sparking fresh hope that he could chase down Jack Nicklaus’ record of 18 major championships.

The American has been out injured following further back surgery in December – and was hopeful of returning for this year’s Masters in April.

Woods’ last appearance on the course came alongside his son Charlie at the PNC Championship at the end of 2020.

He hosted the Genesis Open at Riviera last weekend, handing Max Homa the trophy and commentating alongside Jim Nantz on Sunday.

The world of golf has been reacting to the news, offering prayers and best wishes for Woods as he undergoes surgery.

World No. 3 Justin Thomas, who has become close friends with Woods and his family, got emotional while reacting to the news.

“I’m sick to my stomach,” Thomas said, speaking at a press conference ahead of the WGC-Workday Championship.

“You know, it hurts to see one of your… now one of my closest friends get in an accident.

“Man, I just hope he’s all right. Just worry for his kids, you know. I’m sure they’re struggling.”