BREAKING: PDP Group Calls For Probe Of Ayu, And Those That Cleared Umo And Sheriff As Guber Candidates 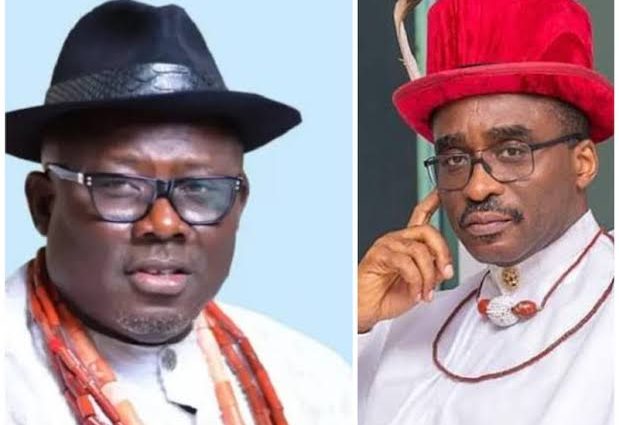 The Concerned Peoples Democratic Party League (CPDPL) has said that the People’s Democratic Party (PDP) National Chairman, Sen. Dr. Iyorchia Ayu should be blamed if PDP loses Delta and Akwa Ibom states Gubernatorial elections to the opposition parties. They also called for Ayu’s and the committee that cleared Eno and sheriff, to be probed if the rumour making the rounds, about dollars exchanging hands is anything to go by.

The group’s statement is informed by the certificate scandals and cases instituted in the courts against the governorship flag bearers, Rt. Hon. Francis Sheriff Oborevwori of Delta and Pastor Eno Umo of Akwa Ibom state. The action is filled by the aspirants that took the second positions in the PDP state congresses, Olorogun David Edevbie of Delta State and Hon. Akan Okon of Akwa Ibom State.

“It’s unfortunate that the Peoples Democratic Party (PDP) with a proven history of avalanches of people with intimidating and scandal-free certificates, intellectual capacity, and prowess made such an amateurish mistake of presenting candidates with alleged questionable certificates, et al, in both Delta and Akwa Ibom states to fly the flag of our great party”, the group said.

The group emphasized that “a more thorough scrutiny could have saved the party the embarrassment of being dragged to court as co-defendants in cases of certificate forgeries, et al, against the men whom it handed its gubernatorial ticket to in Delta and Akwa Ibom states.”

“Were the PDP Gubernatorial Screening Committees unaware of the implications of allowing candidates with questionable claims and certificate discrepancies and forgeries? Indeed there are so many questions that the PDP screening committees in Delta and Akwa Ibom states could have elicited from the candidates, rather than glossing them over.”

The CPDPL asked, “If Sheriff and Eno, as demonstrated by information in the public domain, are beset by the certificate scandals, why is the PDP risking them as their candidates, knowing that the oppositions would take advantage of very porous legal ground and the courts would award the states to them. What if a few days before the election or even after victory had been won by the PDP, a similar ruling that aborted the governorship dream of David Lyon of Bayelsa APC at the eleventh hour, is given against the PDP and its candidates? If the court can sack the governor-elect belonging to the ruling party, why is anyone under any illusion that the same judiciary would waste a second in doing the needful if it is proven that PDP’s Pastor Umo Eno and Rt Hon. Sheriff Oborevwori is guilty of presenting forged certificates to INEC? Would anyone accuse the powers-that-be of witch-hunting the PDP if the state is lost to the opposition in 2023?”

The PDP needs to carefully weigh its options ahead of the next gubernatorial polls and be certain that the National Chairman is not set up PDP for a spectacle fall, particularly at a time when the oppositions are waiting in the wings to grab power by all means in the oil-rich Niger Delta states.

We believe Right Hon. Oborevwori Sheriff Francis Orohwedor and Pastor Eno Umo were cleared in error and without proper scrutiny by those that we’re saddled with the responsibility for screening the candidates. But It’s not too late for the party to take the path of honour by reconsidering its decision regarding the party’s gubernatorial candidates in Delta and Akwa Ibom states and not be goaded into the path of oblivion in these states.

Although, the PDP National Chairman, has since ceased to enjoy the support and recognition of the only pressure group that has been advocating for a people-oriented PDP against the dollar and dull PDP under Ayu’s watch.
“PDP has been far from the consciousness of the people of Nigeria since Ayu started displaying his incompetence and insensitivity to PDP members most especially southern PDP members,” CPDPL claims.