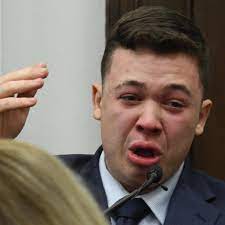 Kyle Rittenhouse, the teenager who killed two people and shot another during unrest in Kenosha, Wisconsin, was acquitted of first-degree intentional homicide and four other felony charges on Friday.

Rittenhouse, wearing a dark jacket with a burgundy tie and shirt, stood behind the defense table as each not guilty verdict was read. He held back tears and appeared to collapse forward on the table.

The panel of five men and seven women deliberated more than 25 hours over the past four days. They had asked the court a handful of questions, including requests Wednesday to rewatch much of the video evidence of the shootings.

One of those videos, a drone video showing Rittenhouse shooting Joseph Rosenbaum, was at the heart of a defense request for a mistrial in the case. Rittenhouse’s defense team said the prosecution sent a compressed, lower-quality version of the video during the trial, which the prosecution described as a technical glitch. The defense realized the discrepancy after testimony had ended and so asked the judge to declare a mistrial.

The defense has also filed a motion for mistrial with prejudice — meaning the state would not be able to retry Rittenhouse — for intentional “prosecutorial overreach” related to the prosecution’s line of questioning during Rittenhouse’s testimony last week.

Judge Bruce Schroeder has not ruled on either motion. On Thursday, Schroeder banned MSNBC from the courtroom for allegedly following a jury bus. The judge said a man was driving about a block behind the jury bus on Wednesday evening and went through a red light. The man was pulled over by police and told them he worked for NBC News and had been instructed to follow the bus, according to the judge.

An NBC News spokesperson told CNN the producer was a freelancer and never intended to contact or photograph jurors. Schroeder, as he was dismissing the panel for the day later Thursday, a greed to a juror’s request to take the jury instructions home. “No notes to go home, but they may take their instructions,” Schroeder said.

The deliberations come after a two-week trial highlighted by emotional and compelling testimony from Rittenhouse, the 18-year-old at the center of debates around self-defense, gun ownership and Black Lives Matter demonstrations. On the stand, he told jurors — and the viewing public — that he acted in self-defense.

Schroeder dismissed a misdemeanor weapons possession charge and a non-criminal curfew violation prior to deliberations. The charges stem from the chaotic unrest last year in the wake of the Kenosha police shooting of Jacob Blake, a 29-year-old Black man.

After instances of rioting and fiery destruction, Rittenhouse, 17 at the time, took a medical kit and an AR-15-style rifle and joined up with a group of other armed people in Kenosha on August 25, 2020. There, Rittenhouse fatally shot Rosenbaum — who was chasing the teenager and threw a bag at him — and then tried to flee.

A crowd of people pursued the teenager, and Rittenhouse shot at an unidentified man who kicked him; fatally shot Anthony Huber, who had hit him with a skateboard; and wounded Gaige Grosskreutz, who was armed with a pistol.