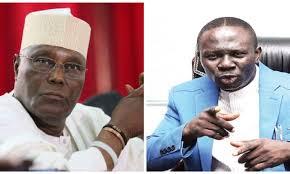 I have just read the diatribe of one Daniel Bwala, who claims to be a Spokesman to a desperate-for-nothing of a candidate, and I had a good laugh; I laughed at his hollowness. I am happy that Bwala acknowledges that he, himself, is an unknown entity; the reason he repeatedly said he’s a Presidential Spokesman; at which job, he spends his time conjuring lyrics of infamy to the warped consciousness of a quango while masquerading as the image maker of that poisoned chalice. When quacks talk in The Public Relations domain, they unwittingly expose their quackery, by their choice of words and delivery. Why doesn’t Bwala go to courts to handle briefs for his clients, as a trained Lawyer? How can a “good” and supposedly well informed lawyer spend his time bootlicking, in the name of Spokesmanship, just because of a one million naira salary per month, pouring saliva all over the place like an uncultured rottweiler. From Office Assistant to Deputy Senate President, to being Spokesman to a beleaguered candidate of the PDP, Bwala has been salivating like Pavlov dog, for the crumbs he gets. Not impressive at all for a trained lawyer.

Know very succinctly, Bwala, that I was a member of The PDP Presidential Campaign Council in 2019, when Atiku Abubakar ran for the same position that he is running for today. My stance against Atiku today,  is based on the need to balance the power algorithms of the country after Buhari’s presidency. His insensitivity to this singular sentiment, a co-factor of our unity in diversity, has become his nemesis in this present voyage that is terminally headed for the rocks. As far back as 2002 till date, Bwala, I have been Spokesman to former President IBB. I was National Director of Publicity of the National Democratic Party, National Chairman of National Democratic Party in 2007, former Special Adviser, Media to the Edo State Governor, Adams Oshiomhole, and later former Commissioner for Information of the same Governor. I was a member of the campaign of the PDP presidential campaign in 1999, and was also actively involved in the presidential primaries in Jos. I was a foundational member of the APC in 2014 in Edo State. I left the APC in 2017 out of my personal conviction and volition. I have not joined any party since my recent exit from the PDP, when Atiku, Bwala’s paymaster, usurped the throne, breaking all known zoning provisions in its constitution.

With all these credentials, and in line with my training, I am in pole position of authority on issues of politics, governance, and information management and dissemination. I am neither an alarmist like Bwala nor a propagandist with no clue as to the real issues behind the issues. I am seasoned enough to understand the undercurrents of Nigeria’s political emanations, and am not one, who is left outside the corridors like Bwala, when serious meetings are being conducted.

Be informed Bwala, that I have acquired a media image of my own and run my media office in Wuse 2, in Abuja; without being anybody’s lapdog like you. You told a wild lie when you said that eleven Governors and thirty five Senators of APC are supporting your boss’s aspiration; an aspiration that is dead on arrival. A man with zero credibility, a so-called unifier that cannot unify his opposition party; a person running amok trying to clutch at flotsam like a sinking man. Bwala, you should learn to give respect to your seniors who are cut out for their jobs, rather than attacking noble professionals like me, in your struggle to no avail to do damage control for the jaded aspiration of a turncoat politician.That claim on the APC Governors, is an outright lie! I dare you to mention just five of them, if you are not a liar. If I can tell the fact that you were hired with a one million naira salary per month as contained in your letter of appointment, that should tell you that I am conversant with what obtains in Atiku’s camp. All my predictions in political engagements have always proven correct. Those who I warned in time past, that ignored my warnings and predictions, are today lamenting their political cul-de-sac.

Bwala, you should go and read about your paymaster, Atiku, in Obasanjo’s “My Watch” so you can get a more detailed characterisation of the man you brag about and whose image you launder. A person who left PDP for AC, then back to PDP, again to APC, and APC for PDP; he should after such circumnavigation, like in Lord Lugard’s voyage to nowhere, by now, be tired of frolicking in contradiction. A serious minded leader, claiming to be of such huge stature, should not be seen as a mobile politician, who is dithering, politically promiscuous, and fickle, and has only one constant desire -his presidential aspiration. A character in contradiction. Your recruitment into his noisy attack dogs colony is enough reason to take your paymaster, far away from the corridor of Aso Villa. No matter the backdoor plots, what I can promise you, Bwala, is that, I will be exposing you all one after the other; be they in Dubai, your paymaster, Atiku’s home town and or in Abuja, his habitue. I am not like you that cannot visit your village but sit here, in Abuja raising the roof all around town. I am not one of those you and your paymaster can threaten. I am a freeborn of Nigeria, my country. I will live in it with the best of traditions as a law abiding citizen. The only reason you are attacking me is because I am telling the truth to ALL NIGERIANS, that your paymaster, ALHAJI ATIKU ABUBAKAR, IS NOT GOOD FOR NIGERIA AND SHOULD NOT BE VOTED FOR.

ASIWAJU BOLA AHMED TINUBU IS THE MAN WHO BEST FITS THE OFFICE OF THE PRESIDENT OF NIGERIA AT THE MOMENT.

Should you, Bwala,  desire to engage me further, I am ALWAYS available.