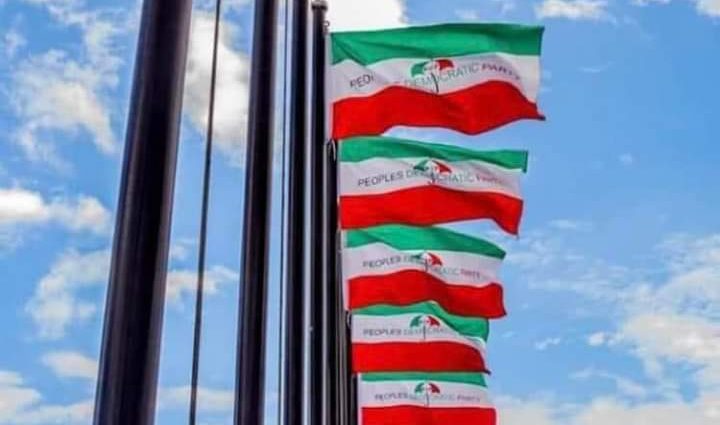 A palpable tension may be brewing in the Peoples Democratic Party (PDP). The problem is not only about the zoning and convention committee lists but also, a vocal group, the Concerned PDP League (CPDPL), also known as ‘PDP Watchdog’, is demanding the immediate resignation of the party’s National Secretary, Sen. Samuel Anyanwu, National Organizing Secretary, Hon. Umar M. Bature and the  Deputy National Organizing Secretary Sen. Ighoyota Amori.

It’s no secret indeed that the leadership of the Concerned PDP League (CPDPL) are resilient in our resolved to advocate and campaign for the right things to be done in the PDP in particular and Nigeria in general. CPDPL leadership does not lack the courage to express their opinion and speak truth to power, whether positive or negative, not minding the threat to life or excluding CPDPL leaders from PDP engagements etc

The group said the demand became necessary following the continuing occupation of their position despite the weighty allegations against them. Some of the alleged malfeasance borders on suspension and acts that are inconsistent with the electoral act as amended 2022 as well as PDP and the Nigeria constitution as amended 2017 and 1999, respectively.

The Concerned Peoples Democratic Party (CPDPL) in a press release signed by the Leader, Comrade  Daboikiabo Z. Warmate, and the General Secretary, Alhaji Tasiu M. Muhammed, said the concerned national officers must resign for Nigerians to take the party seriously.

The occupiers of the offices of the National Organizing Secretary and Deputy  National Organizing Secretary by Hon. Umar M. Bature and Sen. I. Amori directly disengage all the so called commitment to their office and fundamentally damage the neutrality and integrity of the NS, NOS and DNOS hallowed office for them to have bought  or pick the interest/ nomination forms.

In the same vein, we call on the National Secretary of our great party, Senator Samuel Anyanwu, to honourably resign  following the very weighty allegations of his subsisting expulsion from the party, before his emergence as party national official and the consequences of his signing PDP official documents and his involvement in the violence that greeted Imo Adhoc Delegates Congresses especially those of Ideato North and Ideato South LGAs as alleged by the opposition coalition spokesperson, Ikenga Imo Ugochinyere, which resultant effect is a court order restricting PDP and INEC from using the 3 man adhoc delegates for any PDP primary election in Imo state.

It is in defence of the sanctity of a key institution and democratic leadership recruitment platform like our great party, the People’s Democratic Party and the national offices that has informed our call for Hon. Bature and Sen. I. Amori to tender their resignation as National organizing Secretary and deputy National Organizing Secretary to pursue their ambitions and the National Secretary to resign so as not to drag PDP into a political and judicial quigemire that may jeopardice the party’s chances in the 2023 elections.

Why do they want to be judges to adjudicate in their own cases? Was that why the whole committees list for the conduct of the ward congress was shrouded in secrecy? not even a peekaboo publicity like the screening and screening appeal committees.

‘It runs against political morality, democratic tenets and the electoral act as amended 2022, the constitution of Nigeria as amended 1999, and the PDP constitution as amended 2017 for aspirants to remain in office while Contesting election and a person suspended to national secretary. it’s political immorality.

However, we learnt that, Hon. Bature having failed to informed his principal of his new ambition and having gotten a tip-off that, his boss was preparing to present his replacement at the next National Executive Committee meeting, refused to submit his governorship interest/nomination forms. This is in addition to Mallam Aliyu Gambo, publicity secretary of northern PDP stakeholders forum allegations which is an addendum to our press statement.

We condemn the conspiracy of silence and It is absurd. It raises a morality question on the party and it’s leaders and we believe that there should be moral content in politics. National Chairman sir, It’s too early for all these kind of scandals and this is not right. It shouldn’t be happening under your watch.

Dr. Ayu sir, it’s worth notifying you that, the above mention, call it scandal or issue and more has attracted in glorious comment about your leadership of our great party and the party. Attached to this press release are some of them.

This is not right and It should not be accepted by the party. The NOS and DNOS should resign their position immediately and make it public and the NS to explain himself publicly too.

This is the position of the most party faithful. It is not right and we should not allow it to be a part of our party culture.

The group said, if PDP can get it right internally, we will get it right externally too, that’s why we are putting our leaders on their toes.

Alhaji Umar Bature, who is the National Organizing Secretary of PDP has clearly showed himself as a member of APC in PDP NWC who is working for his paymaster in APC to sabotage the Party.

Umar Bature plot to sabotage the PDP finally got to its crescendo when against the norms of the Party, he singlehandedly hijacked committees for ward congress and shrouded everything in secrecy.

Umar Bature went against the PDP Constitution by appointing known members of APC to handle Congresses in different states and covered his tracks by his refusal to publish the names in any of the National dailies nor social media to the shock of members of the Party including the PDP NWC.
We are also aware that Alhaji Bature solicited for and obtained financial gratification from senior Party leaders to surrender original result sheets for the ward Congresses with a view of funding his Sokoto state gubernatorial interest with proceeds of the illicit funds.

We also have it on good authority that Alhaji Bature has entered into unholy agreement with a former Sokoto state governor and APC strongman, Senator Aliyu Wamakko, to be made Governor of Sokoto state in 2023 and defect to APC afterwards. In return, Bature is mandated by his APC paymasters to put PDP in the path of destruction to weaken the Party for APC to easily  emerge victorious in 2023.

We are using this medium to raise alarm to Party leaders and members to prevail on Bature to resign as Organizing Secretary or force him out of office because Bature is a mole that must be stopped before it is too late.
SignedMallam Aliyu GamboPublicity Secretary, Northern PDP Stakeholders Forum.